the emperor and the maula (Robert Silverberg)

Title: the emperor and the maula 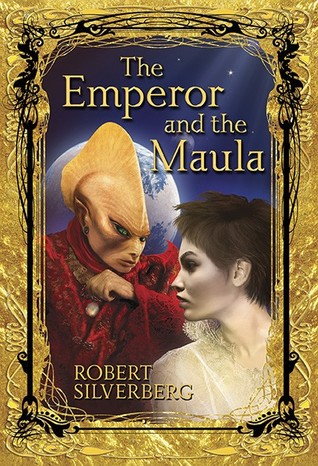 The fact that it was a sci-fi Scheherazade tale would have been enough in and of itself.  And this book was a wonderful one.  Our Scheherazade, Laylah Walis, is a human from Earth.  Earth has been conquered by an alien race.  She travels to the forbidden city of Haraar which she knows is punishable by death.  Her goal is to meet the emperor.  But for what purpose?

Of course the fun of this tale is that the reader is learning Laylah’s story at the same time that the emperor is.  She certainly is a compelling character and her stories sped along.  The cliffhangers at the end of each night’s tale bothered me as much as the emperor.  I needed to know more!  The only downside is that by the end of the book, I could have listened to many more of Laylah’s stories.  The ending was good but I still need more!

As for the author, I learned from sandy @ fantasyliterature‘s review of this novel several amazing facts.  Apparently Mr. Silverberg is the author of no fewer than “78 sci-fi novels, almost 450 short stories and novellas, around 70 books of nonfiction, and around 185 novels of, um, “adult fiction,” in addition to having edited over 130 anthologies.”  Talk about prolific!  He is currently 82 years old.  Goodreads says that he has won 5 Hugos and 5 Nebulas.  Also he is a 2004 Grand Master from the Science Fiction and Fantasy Writers of America.  Sheesh!

I am regretful that I didn’t know about him before but am delighted to have remedied that fact.  If ye be not familiar with this author then mayhaps ye should pick this book up.  I certainly enjoyed the foray.

Robert Silverberg’s The Emperor and the Maula was written in 1992 for an aborted publishing project and has been printed only once, in a radically abbreviated version. This deluxe new edition restores more than 15,000 words of missing text, allowing us to see, for the first time, the author’s original intent. The result is both a genuine publishing event and an unexpected gift for Silverberg’s legion of readers.

The Emperor and the Maula is Silverberg’s Scheherazade tale, the story of a woman telling a story in order to extend—and ultimately preserve—her life. The Scheherazade of this striking story is Laylah Walis, denizen of a far-future Earth which has been invaded and conquered by a star-faring race known as the Ansaarans. Laylah is a “maula,” a barbarian forbidden, under pain of death, to set foot on the sacred home worlds of the imperial conquerors. Knowing the risks, Laylah travels to Haraar, home of the galactic emperor himself. Once there, she delays her execution by telling the emperor a story—and telling it well.

That story, the tale within a tale that dominates this book, is, in fact, Laylah’s own story. It is also the story of the beleaguered planet Earth, of people struggling, often futilely, to oppose their alien masters and restore their lost independence. Colorful, seamlessly written, and always powerfully imagined, The Emperor and the Maula shows us Grandmaster Silverberg at his representative best. This is science fiction as it should be written, but all too seldom is. No one does it better than Robert Silverberg. No one ever has.

the emperor and the maula – Book