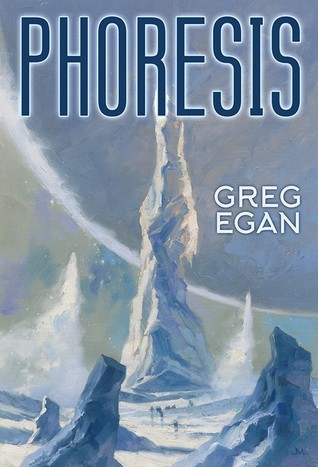 What I didn’t know before reading this was that the author is known for his hard science fiction.  So while I loved the introduction to the story, I quickly became lost in the physics of the first section.  I understood enough to know what Freya was trying to accomplish but not how it would work or how the “experiment” she set up convinced people.  This section was from 11 to 30%.  In this short work, it wasn’t too onerous and I was intrigued enough to continue reading.

After that the story picked up pace, and I found it mostly fascinating.  The science played a part but then there were fun things like tower building, gilders, and dealing with the challenges of living on a new planet.

The book has three parts and ye follow the women through multiple generations, which was cool. One of the awesome aspects was that the women were always looking at the larger long-term goals.  Most projects were on a scale where many generations would pass before results could be determined.  The women had to choose between starvation today or the potential possibility of survival of their descendants tomorrow. I enjoyed seeing why they chose to do things, the consequences of their choices, and how time changed perspectives.

The not so cool part was that many of the women felt very similar and interchangeable.  I happened to like their take-charge personalities, intelligence, and determination.  But perhaps it would have been nice to see other personality types.  Or maybe those types were the only possibilities to guarantee survival.

Also the process of reproduction made me less than comfortable.  That is where the phoresis title comes in.  This biological phenomenon is when one organism transports another.  In this book each woman carries three of her brothers inside of her.  The brothers’ emotions can influence the women’s actions as all of them are dependent on each other for survival.  The brothers are hardly intelligent and fight with each other for the right to breed.  So far, fine with that.  It posed some interesting problems in women taking life-risking challenges.  It is the how of the breeding that was unappetizing.  Basically the brothers emerge from the uterus and . . . um . . . merge with another women for fertilization.  This only happened once in this book and was hazy in detail but me mind filled in the blanks.

Ultimately while I enjoyed the story overall and thought the writing style was excellent, this is not one I would re-read.  I am also not sure I could read anything else by the author if the physics is like this in everything he writes.

This be the third read in me April BookBum Club Challenge!  Much thanks to the BookBum Club for giving me the incentive to finally read this “short and sweet” book (168 pgs).  Day three – challenge complete!  Next up: i met a traveller in an antique land.  Check out that review on Monday!

Welcome to Tvíbura and Tvíburi, the richly imagined twin planets that stand at the center of Greg Egan’s extraordinary new novella, Phoresis.

These two planets—one inhabited, one not—exist in extreme proximity to one another.  As the narrative begins, Tvíbura, the inhabited planet, faces a grave and imminent threat: the food supply is dwindling, and the conditions necessary for sustaining life are growing more and more erratic. Faced with the prospect of eventual catastrophe, the remarkable women of Tvíbura launch a pair of ambitious, long-term initiatives. The first involves an attempt to reanimate the planet’s increasingly dormant ecosphere. The second concerns the building of a literal “bridge between worlds” that will connect Tvíbura to its (hopefully) habitable sibling.

These initiatives form the core of the narrative, which is divided into three sections and takes place over many generations. The resulting triptych is at once an epic in miniature, a work of hard SF filled with humanist touches, and a compressed, meticulously detailed example of original world building. Most centrally, it is a portrait of people struggling—and sometimes risking everything—to preserve a future they will not live to see. Erudite and entertaining, Phoresis shows us Egan at his formidable best, offering the sort of intense, visionary pleasures only science fiction can provide.

11 thoughts on “On the Horizon – phoresis (Greg Egan)”