Ahoy there me mateys!  I received this horror eARC from NetGalley in exchange for an honest review.  So here be me honest musings . . . 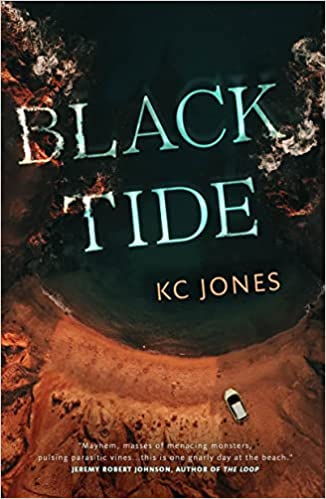 The story begins with following Beth, who is a mess of a person.  If there is a bad choice, she will make it.  I had a hard time with the beginning of the novel because I didn’t find Beth to be likeable at first.  I also didn’t like the continuing analogy of her being a “car wreck.”  I did find her job of house-sitting for the rich to be kind of fun.  Beth is bored and looking for trouble so she goes to seduce the neighbor, Mike.  But the one-night-stand happens to coincide with the end of the world.

Mike and Beth initially don’t know what is going on because they were focused on other things.  I enjoyed that set-up.  The two (and the dog) go to the local beach to collect meteors that fell that night.  While there, they begin to learn what really happened and also end up trapped in the car.  For a story where the characters are stuck, I actually found a lot of tension and suspense.  Both the characters and the reader are learning as the day progresses and that was a lot of fun.  Plus I enjoyed the reason the world ended and how Beth and Mike deal with it.  The strangers have to rely on each other to survive.

There were some negatives.  Things do not go well for Jake the dog and really was the dog necessary?  He seemed added in to elicit sympathy and be a plot device.  Also a third character is thrown into the mix and that is where both the plot and especially the ending did not appeal to me.  The book is filled with unbelievable things that are still fun but when third character arrives, the unbelievability involving the human behavior is ratcheted up and I didn’t like it.  It is personal preference though.  Others might enjoy that twist.  Oh and there is a random sex scene in the latter part of the book that could have been tossed out for the better.

Overall though, I really enjoyed the tension of being trapped in the car on a beach with otherworldly creatures.  The ending was vague and the characters seemed hopeful.  But I don’t think things bode well for them.  Arrr!

It was just another day at the beach. And then the world ended.

Mike and Beth didn’t know each other existed before the night of the meteor shower. A melancholy film producer and a house sitter barely scraping by, chance made them neighbors, a bottle of champagne brought them together, and a shared need for human connection sparked something more.

After a drunken and desperate one-night-stand, the two strangers awake to discover a surprise astronomical event has left widespread destruction in its wake. But the cosmic lightshow was only a part of something much bigger, and far more terrifying. When a set of lost car keys leaves them stranded on an empty stretch of Oregon coast, when their emergency calls go unanswered and inhuman screams echo from the dunes, when the rising tide reaches for the car and unspeakable horrors close in around them, these two self-destructive souls must find in each other the strength to overcome past pain and the fight to survive a nightmare of apocalyptic scale.

2 thoughts on “On the Horizon – black tide (KC Jones)”