Ahoy there me mateys!  I received an eArc of this sci-fi novel through NetGalley in exchange for me honest musings.  This be book 4 of a series.  Though I try to post no spoilers, read at yer own peril . . . 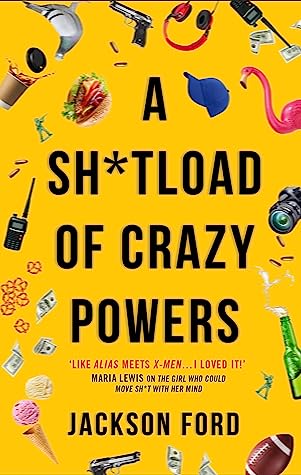 This series be just plain over-the-top and silly fun.  I continue to love Teagan and the other members of the China Shop.  This installment was a little odd in that it didn’t really further the plot set up in previous books.  Ye could toss out this book plot-wise.  However, character-wise it is extremely enjoyable to watch the relationships between the members of the China Shop evolve.  Many of the chapters are from Annie’s point of view.  Given what happened to her in the previous book, watching her struggle and learning more about her past was excellent.  Also excellent was watching Teagan lose her powers and yet continue to be her snarky self who cares about others.  I look forward to the China Shops adventures in the next book.  Arrr!

Check out Matey Tammy’s five-star review where she says:

“Teagan Frost and her friends are back with another laugh-out-loud funny, high octane crazy adventure, with terrorists, scary siblings, car chases, sexy German billionaires, helicopter action and a whole sh*tload of crazy powers. This series just keeps getting better and better, and if you haven’t started it yet, I urge you to pick up the first book so you don’t miss any of Teagan’s shenanigans. This series is not only fun, but it’s full of wonderful friendships and emotional moments too.”

Teagan Frost has enough sh*t to deal with, between her job as a telekinetic government operative and a certain pair of siblings who have returned from the dead to wreak havoc with their powers. But little does she know, things are about to get even more crazy . . .

Teagan might have survived the flash flood of the century, but now she’s trapped in a hotel by a bunch of gun-toting maniacs. And to make matters worse, her powers have mysteriously disappeared. Faced with certain death at every turn, Teagan will need to use every resource she has to stop a plot that could destroy Los Angeles – maybe even the entire world.

Full of imagination, wit and random sh*t flying though the air, this insane new Frost Files adventure will blow your tiny mind.

To visit the author’s website go to:
Jackson Ford – Author

To buy the novel please visit:
a sh*tload of crazy powers – Book 4