Ahoy there me mateys!  I received this historical fantasy eARC from NetGalley in exchange for an honest review.  So here be me honest musings . . . 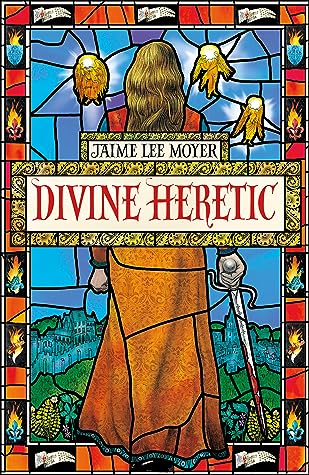 The cover drew me in, I have heard good things about the author, and I have always been intrigued by the story of Jeanne d’Arc.  This was a quick read with a fun premise but ultimately rather forgettable with some substantial differences of the “history” that really irked me.

This version tells the story of Jeanne d’Arc from of the perspective of her believing that the divine inspiration wasn’t angels but rather evil beings and that she had no choice but to eventually succumb to their demands.  Cool.

Not so cool is how the author chose to make it a bad romance.  She didn’t explain why the evil beings wanted Charles on the throne, added in a Moorish husband for Jeanne, and gave it a happily ever after.  What?  Umm burned at the stake?  Jeanne also has no agency or spunk and is rather boring.  Men run her life.  Rape is a subplot as an excuse to get her to leave her village.  The demons threaten with no real logic or skill.

With all that fascinating history and myth to draw from, the author somehow manages to make a Jeanne D’Arc story where not much happens and where the events that do are rather nonsensical.  She doesn’t even use the traditional timelines or bare bones of the historical record.  This novel fails on both a historical history front and the fantasy front.  So it must walk the plank!  Arrr!

Goodreads has this to say about the novel (shortened by me cause spoilers):

Everyone knows the story of Joan of Arc, a peasant girl who put Charles VII on the throne and spearheaded France’s victory over Britain before being burned by the English as a heretic and witch.

But things are not always as they appear . . .

Jeanne is only a shepherd’s daughter, not the Warrior Maid of the prophecy, but she is stubborn and rebellious, and finds ways to avoid doing – and being – what these creatures want. Resistance has a terrifying price, but Jeanne is determined to fight for the life she wants . . .

Not everyone is destined to be a hero. Sometimes you have no choice.