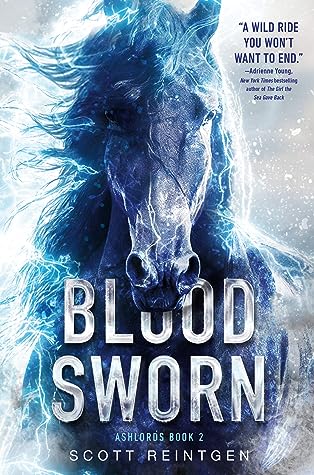 To those new to the crew, ye should know that horses were me first love before the sea stole me heart.  So obviously I wanted to read this series about magical horses, known as phoenixes.  Basically these horses were gifts from the gods, are powered by the sun, and last a day before bursting into flames and turning into ashes.  The riders save the ashes and when they are set back out in the rising sun, the phoenix horse is reborn.  Of course there be a catch.  If ye mix certain chemicals into the ashes, the phoenix’s properties can change.  They can become faster, grow armor, etc.  Cool.

This is the second book of a duology.  War is at hand and the three classes – ruling Ashlords, middle class Longhorns, and Dividians at the bottom wait to see who is going to get the upper hand.  But it seems like the Gods are also at war and the consequences are interesting and unexpected.

This story continues with the three points of view – one from each of the three classes.  One thing to note about the points of view are that they change tenses: third person, first person, second person present tense.  Ashlord Pippa and Longhorn Adrian are at opposite sides of the conflict.  Imelda continues to be the surprising wildcard.  Like in the first book, I liked the two girls but found Adrian to be rather bland.

Unlike the first book, the phoenix horses do not play much of a real part in the plot.  I missed them.  The tone and focus of this book was completely different to book one.  It sometimes felt like another world altogether.  I did think the pacing was a bit off and the book could have had some restructuring or trimming to strength it.  I did, however, enjoy the better understanding of how the gods worked and did not expect the plot to go in the direction it did.  I would have liked more focus on the specifics of each god.  I was glad that the romance aspects were very lightly done.

Though I wasn’t thrilled with the rebellion aspect of this book, I am glad I finished the duology.  I just wish the phoenix horses had played as much of a part in this book as they did in the first.  Arrrr!

The Races are over. War has begun.

Ashlord and Longhand armies battle for control of the Empire as Dividian rebels do their best to survive the crossfire. This is no longer a game. It’s life or death.

Adrian, Pippa, and Imelda each came out of the Races with questions about their role in the ongoing feud. The deeper they dig, the clearer it is that the hatred between their peoples has an origin point: the gods.

Their secrets are long-buried, but one disgruntled deity is ready to unveil the truth. Every whisper leads back to the underworld. What are the gods hiding there? As the sands of the Empire shift, these heroes will do everything they can to aim their people at the true enemy. But is it already too late?

4 thoughts on “On the Horizon – bloodsworn (Scott Reintgen)”