Ahoy there mateys!  While I try to post no spoilers, if ye haven’t read the first book in this series, the girl with ghost eyes, then ye might want to skip this post and go read the first book.  Worth the read.  If ye keep reading this log then ye have been forewarned and continue at yer own peril . . .

the girl with no face (M.H. Boroson)

Title: the girl with no face 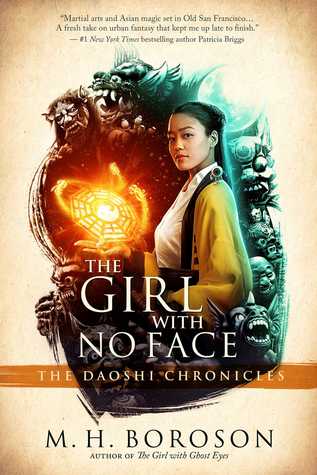 I absolutely loved book one and have been avidly waiting for this sequel.  The short story set in this world did briefly satisfy the craving but only until I finished reading it.  So I was absolutely overjoyed to get an eArc of book two.

For those who haven’t heard of this series, it is a historical fiction fantasy set in Chinatown of San Francisco in the late 1890s.  It deals with elements of Daoism, kung fu, monsters, magic, love, and Chinese folklore.  The main character is Li-lin who is a Daoist priestess who can see the spirit world due to her “yin eyes.”  She has to struggle with the social stigmas of her role in the spirit world, being an immigrant, being a girl in a male-dominated society, and the shame of being a widow.  In the first book, Li-lin had to stop a sorcerer but the consequences to her livelihood and relationship with her father were rough.

In this book, Li-lin has been tasked to help solve the mystery of the death of a nine year-old who suffocated by flowers growing out of her nose and mouth.  Armed with her peachwood sword, martial arts, burning paper talismans, and intelligence, she is determined to bring justice to the dead.  Of course everything is always more complicated then it seems.

This book was so intense!  This story certainly has plenty of action.  But the real heart of this story is about the reflections on family as expressed by the relationship between Li-lin and her father.  I was on an emotional rollercoaster experiencing the two of them trying to communicate and relate to one another.  And that revelation at the end was heart-wrenching.

But I also had so much fun!  Li-lin is such a fantastic character.  She can be beset by guilt and loss and self-doubt.  But her tenacity, intelligence, loyalty, bravery, and spunk make her one of the best characters I have read about.  Li-lin continues to mature and find her place in society.  I continue to love the spirit world and watching Li-lin practicing Daoism.

I can see the love and work put into this story.  It be exquisite.  As the author’s Goodreads bio says:

One day he realized he could combine everything he loved: Chinese ghost lore, Buffy, kung fu movies, fantasy novels, history. He could write stories about Chinese magic and monsters, using these incredible cultural details as metaphors to dramatize the experiences of immigrants in America.

Stories told from inside the culture, centered on people whose lives had been treated as marginal. Stories inverting the margins, subverting stereotypes. Chinese American characters portrayed as three-dimensional, diverse human beings — facing challenges, earning a living, supporting families, struggling to hold on to traditional values in a new country. Exciting, action-packed stories that base their fantasy imagery in Chinese folklore, but tackle issues of vital importance in today’s world, like race, class, gender, culture, and power.

This book does capture those sentiments.  I also loved the author’s note at the end.  I didn’t want to start the book because I knew I would be sad when it was over.  Once I did start, I couldn’t put it down and gobbled it up.  And of course, I now want the next book in the series.  The world needs more fantasy like these books.  If ye haven’t started this series yet, what are ye lollygagging for?  Arrrr!

It’s the end of the Nineteenth Century. San Francisco’s cobblestone streets are haunted, but Chinatown has an unlikely protector in a young Daoist priestess named Li-lin. Using only her martial arts training, spiritual magic, a sword made from peachwood, and the walking, talking spirit of a human eye, Li-lin stands alone to defend her immigrant community from supernatural threats.

But when the body of a young girl is brought to the deadhouse Li-lin oversees for a local group of gangsters, she faces her most bewildering—and potentially dangerous—assignment yet. The nine-year-old has died from suffocation . . . specifically by flowers growing out of her nose and mouth. Li-lin suspects Gong Tau, a dirty and primitive form of dark magic. But who is behind the spell, and why, will take her on a perilous journey deep into a dangerous world of ghosts and spirits.

With hard historical realism and meticulously researched depictions of Chinese monsters and magic that have never been written about in the English language, The Girl with No Face draws from the action-packed cinema of Hong Kong to create a compelling and unforgettable tale of historical fantasy and Chinese lore.

To buy this book visit:

the girl with no face – Book

14 thoughts on “On the Horizon – the girl with no face (M.H. Boroson) – an underrated series”