Ahoy there me mateys!  Those who have been aboard for a while know that urban fantasy and I are not usually friends.  In fact we tend to be enemies.  I can’t explain why.  It’s just a truth.  And yet this here be a combined review of the first two books in this urban fantasy series.  Keep reading to find out why.  While I try to post no spoilers, ye have been forewarned and continue at yer own peril . . .

So basically, I can blame two things for reading this series.  One is the fascinating cover that always drew me attention to the book when I saw it: 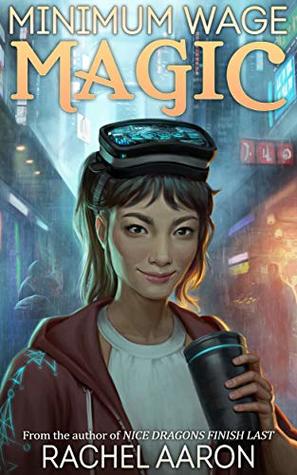 It is striking and appealing.  It made me want to know what the book was about when I saw it.  Every single time.  So I would read the blurb, think it sounded interesting, think “nah urban fantasy,” and then forget about it again.  See cover.  Repeat.  The other influence be this review from Matey Niki Hawkes @ theobsessivebookseller which finally convinced me to read the dang thing.  It it she says:

within this world Rachel Aaron has created a fun fusion of genres – fantasy elements (dragons, magic), urban fantasy plot and settings, all told with an exuberant YA feel (without any unfortunate YA tropes or issues). If you’re sick of the same old stuff, let this author give you a breath of fresh air. 🙂

So I added it to the list.  Then the day came.  I am a mood reader who didn’t know what I wanted to read.  Then I discovered Amazon Prime reading which just happened to have minimum wage magic as one of the books I could borrow.  So I did and I loved it.  I loved it enough to immediately buy book two and read that one as well.  I am irked that I have to wait for book three.

So what is the series about?  Well the books are set in a future Detroit after magic has returned to the world following a very long absence.  The city is the most magical one on the planet.  Basically anything goes – well except for not paying rent.  Should ye fall behind, yer unit gets sold to the highest bidder, a Cleaner, who gets to empty the place for the next tenants in exchange for the authority to keep whatever the previous owner has left behind.  Very much not a glamorous job.

One such Cleaner is Opal Yong-ae who is a freelance mage trying to pay a debt on a fierce timeline.  I won’t get into the whys and wherefores of the debt because of spoilers.  But let’s say that her latest job turns out to be different because of the dead body in the apartment and not much else of real value.  Trouble ensues.  And it was fun.

Part of the fun comes from the character of Opal herself.  She be a bit of mess.  She is smart, thrifty, and clever but cannot control her magic very well.  Instead of control she uses blunt force.  Force that causes magic to backfire on the user.  Ouch.  She has an AI mental-wellbeing assistant that cracks me up.  And a run of very bad luck so that she might not make her next (very near) payment.  But she be determined.

The other part of the fun comes from the wonderful world building.  The city is sentient and kinda confusing.  It likes to move buildings and streets around and redesign itself.  It also has a working relationship with the dragons of the city.  Then there are the other gods.  And mythical creatures.  And mages.  And cybernetic folks.  And yet for me, I think the appeal of this was following a silly (but awesome) human in a very cool urban fantasy world.

I liked how everything was wrapped together.  I liked that the romance to come was present but didn’t override the plot.  I liked the light, playful feel of the writing despite the high stakes and action.  The plot twists in the book were both unexpected and plausible.  The slow unveiling of Opal’s past was well done.  And I even loved the ending that I did not see coming even though hints were there.  This book was everything I wish urban fantasy always was.

So what about book two?  Well the second book picks up about a week after the first one.  Opal is still trying to track down money only there be major logistical problems.  Plus Opal makes several bad choices that don’t help.  I actually think book two was even better than the first.  The stakes have ramped way up and the consequences to Opal’s actions are intense.

The romance does come into play here but I actually thought it was sweet and yet did take an unexpected tangent.  I loved the complexities of all the relationships in this one and thought they were fairly seamlessly integrated into the plot.  I loved watching Opal’s stubbornness get in the way.  Though I also loved her sense of honor.  Even the ending was excellent despite the cliffhanger because it wrapped up the second book’s plotline while setting up part of what book three will be about.

Now this series apparently is a spinoff in the same universe as the Heartstriker books even though the author did set them up to be read independently.  I am not sure if I want to read the other series or not.  I only wish that I had book three of the DFZ series right now.  If more urban fantasy was like this then maybe I would like it better.  Arrrr!

Side note: Any suggestions from the crew about urban fantasy recommendations where romance is not the focus?  Be aware that I have tried the Dresden Files and Kate Daniels series and wasn’t enthralled.

The DFZ, the metropolis formerly known as Detroit, is the world’s most magical city with a population of nine million and zero public safety laws. That’s a lot of mages, cybernetically enhanced chrome heads, and mythical beasties who die, get into debt, and otherwise fail to pay their rent. When they can’t pay their bills, their stuff gets sold to the highest bidder to cover the tab.

That’s when they call me. My name is Opal Yong-ae, and I’m a Cleaner: a freelance mage with an art history degree who’s employed by the DFZ to sort through the mountains of magical junk people leave behind. It’s not a pretty job, or a safe one—there’s a reason I wear bite-proof gloves—but when you’re deep in debt in a lawless city where gods are real, dragons are traffic hazards, and buildings move around on their own, you don’t get to be picky about where your money comes from. You just have to make it work, even when the only thing of value in your latest repossessed apartment is the dead body of the mage who used to live there.

To buy the novels please visit: