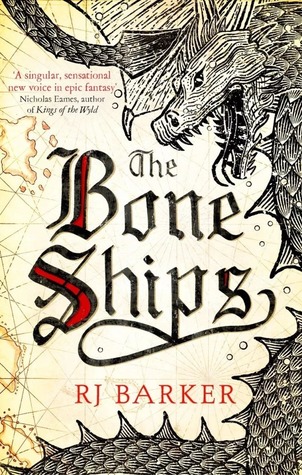 I had been meaning to check out this author’s books for quite some time.  Well when I saw this gorgeous cover, I knew the day had come.  Sea dragons mateys!  I was not disappointed.

This is a slow burn type of fantasy with a ton of world building.  The plot doesn’t really pick up until about the half way mark.  But the ships!  The ships!  They are made out of the bones of the sea dragons of long ago.  There be two opposing island nations that have been raiding and warring with each other for centuries.  At the center of that fight be the bone ships because whoever has the most ships has the upper-hand (Arrrrr!).  But each ship lost at sea be a huge travesty because there be no more dragons.  Bone and the bone ships be at the center of trade and politics.  Bone supplies be ever dwindling.

Joron Twiner be the shipwife on a black bone ship called the Tide Child.  These black ships are crewed by the condemned whose lives are forfeit.  They crew the ship and fight for the navy until the Hag calls them home to the deep.  Joron is an unfit, dastardly drunken cur who fled his duty to both the ship and the navy.  He drowns in grog until one day Lucky Meas Gilbryn shows up to duel his ship away.  Joron doesn’t stand a chance.  He believes his life is over but is surprised when Meas offers him a position as the deck keeper, basically the second in command, instead.

The easy living is no more as Meas is a fierce shipwife who be determined to whip her unsavoury crew into shape.  But this be no simple task.  The ship has been severely neglected, the crew is sullen, and Joron is hardly great leadership material.  It should be a losing proposition.  But there are battles to be fought and when a potential sea dragon be sighted it’s all hands on deck!  A storm be a brewin’.

Personally I love fierce female captains (biased I know!) and I also love redemption stories.  Watching Meas whip her crew into shape and watching Joron learn and step into the role he has been given is delightful.  Meas is a crafty b*tch and I approve.  Give no quarter!!  I also particularly love the windtalker, a Gulliame, an avian magic creature who controls the winds.  I wish I could be friends with the Tide Child’s windtalker and commandeer her to me own ship!

While there be tons of naval terminology and history in this book which was well done and loved, I will admit that it did seem to take a bit too long for the sea dragon to make its appearance.  I was impatient.  The dragon also didn’t get nearly enough page time.  But what ye did see of it be awesome.  The pace of this book was also a bit uneven despite the sea battles and such.  Overall the pace was slow, if engaging, and the scenes didn’t always flow well.  But by the time I be finished, I certainly wanted to know what happens next!

If ye like sea dragons (and who doesn’t?) then I do suggest ye get yer greedy hands on a copy.  Heave ho, me hearties!  Yo ho!

Side note: I still be planning to read the author’s Wounded Kingdom trilogy!

Two nations at war. A prize beyond compare.

For generations, the Hundred Isles have built their ships from the bones of ancient dragons to fight an endless war.

The dragons disappeared, but the battles for supremacy persisted.

Now the first dragon in centuries has been spotted in far-off waters, and both sides see a chance to shift the balance of power in their favour. Because whoever catches it will win not only glory, but the war.

19 thoughts on “Here Be Dragons On the Horizon – the bone ships (R.J. Barker) – sea dragons matey!”