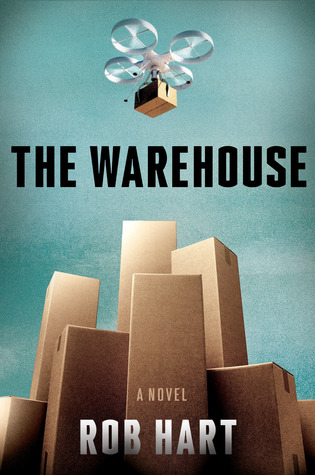 This book was a very fast read with a bit of an agenda against big business and guns.  The setting is in a company called “Cloud” which is basically a stand-in for Amazon.  So what happens when Amazon takes over the world?  This book is an excellent look at a very negative future where this occurs.

In this story ye follow two folks.  Paxton was a small business owner until Amazon . . . I mean the Cloud . . . forced him out because he couldn’t compete with the pricing and contracts.  And then, with limited options, Paxton has no real choice but to take a job with said Cloud.  He goes in with the hope of getting some kind of revenge.  Only he has no idea what kind or even how to go about it.

Zinna is focused, driven, and on a mission.  Money is at stake and so she is determined to get into Cloud, finish her task, and get back out again.  But success is more elusive than she would like.  She discovers that Paxton may be the key to accomplishing her goal.  But both Paxton and Zinna find that their time within the Cloud and with each other starts to change the way they view the world and their places in it.

The Cloud itself was kinda fascinating.  The company is set up to be a utopia.  Employees live, work, and play in one complex.  It was designed to “save America” and be geared towards worker’s rights.  Only, like in most utopias, human greed, sloth, and apathy get in the way.

Both the systems in place and how they are failing were interestingly juxtaposed.  Part of this was in the employee structure.  Zinnia finds herself in one of the lowest positions, a picker responsible for putting ordered goods on the correct conveyor.  Paxton finds himself in security and in the midst of bureaucratic politics and power struggles.  Neither wants the roles they have been given.  I absolutely loved following their thoughts, daily struggles, and shifts in emotions towards the Cloud and each other.

The utopian ideals are wonderfully portrayed in the form of blog entries from the dying company founder.  Interspersed within the overall plot structure, these musings helped cement and articulate both the brilliant veneer and the seedy reality.  This only furthers the absurdity and desperation of this version of future America.

I really did find this book to be a fun and slightly alarming look in the potential future of big business.  The negative for me was the last several chapters of how Zinna’s mission resolves and the subplot of revolt.  Neither of these elements worked in terms of plot resolution.  It felt too Hollywood in its ending and I would have preferred a much more nuanced take.  The ending in particular fell completely flat.  For all of me dislike of the end of the book, the concepts, characters, and Cloud made it totally worth reading.

And for the record, I love Amazon.   Arrrr!

Gun violence, climate change and unemployment have ravaged the United States beyond recognition.

Amidst the wreckage, an online retail giant named Cloud reigns supreme. Cloud brands itself not just as an online storefront, but as a global saviour. Yet, beneath the sunny exterior, lurks something far more sinister.

Paxton never thought he’d be working Security for the company that ruined his life, much less that he’d be moving into one of their sprawling live-work facilities. But compared to what’s left outside, perhaps Cloud isn’t so bad. Better still, through his work he meets Zinnia, who fills him with hope for their shared future.

Except that Zinnia is not what she seems. And Paxton, with his all-access security credentials, might just be her meal ticket.
As Paxton and Zinnia’s agendas place them on a collision course, they’re about to learn just how far the Cloud will go to make the world a better place.

To beat the system, you have to be inside it.

14 thoughts on “On the Horizon – the warehouse (Rob Hart)”