Ahoy there me mateys!  I received this sci-fi thriller eARC from NetGalley in exchange for an honest review.  So here be me honest musings . . . 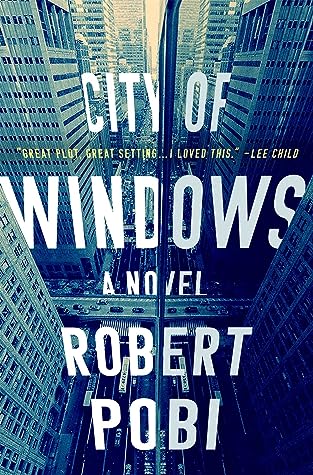 I picked up this book based on two ideas: 1) that NYC is stuck in an apocalyptic type snow storm and 2) that the main character, Lucas Page, has an uncanny ability to view the world in mathematical vectors and angles.  The sci-fi element of seeing the world in this way combined with hunting down an extraordinary sniper appealed to me.  While this was a fast read, it ended up only being okay.

I think part of the issue is that these special abilities of Page really come across more like magic than anything else.  While they seemed awesome the first time they were used, eventually this talent seemed almost arbitrary in how it was used and how it worked.  Also what Page used these skills for became repetitive.  I didn’t expect this small sci-fi element to be the focus of the book given the thriller nature but I was disappointed by it.

Additionally, I was also annoyed by elements of the plot.  While I loved the introduction of the mystery surrounding why law enforcement personnel were being targeted, the resolution was completely lackluster.  A random group of Page’s grad students help solve the question in under 48 hours.  The entire answer of who the mystery sniper is and the motivations behind the crimes were so cliché and ridiculous.  I didn’t mind, at first, that many of the characters in this were anti-government but the eventual politics involved were just super over-the-top.  I didn’t like the cult aspects, the Muslim hatred aspects, or the silly red herring aspects.  And I especially hated the entire ending.

I did like that Lucas Page was a curmudgeon and snarky.  I really enjoyed his antagonistic relationship with the lead FBI agent.  I thought the many of the elements of his disabilites were interesting in terms of the practicalities of dealing with them.  I also loved his driver, Whittaker, and thought she would have made a better main character.   I did not like how Page’s relationship with his wife was portrayed.  She seemed so pissed at him no real reason other than to add “drama” to the plot.  Also I thought the entire subplot involving the sniper and Lucas’s family was dumb.

This is apparently the first book of a series starring Lucas Page.  As the book was a fast read, I don’t mind having read it but I won’t be continuing with the series.

During the worst blizzard in memory, an FBI agent in a moving SUV in New York City is killed by a nearly impossible sniper shot. Unable to pinpoint where the shot came from, as the storm rapidly wipes out evidence, the agent-in-charge Brett Kehoe turns to the one man who might be able to help them–former FBI agent Lucas Page.

Page, a university professor and bestselling author, left the FBI years ago after a tragic event robbed him of a leg, an arm, an eye, and the willingness to continue. But he has an amazing ability to read a crime scene, figure out angles and trajectories in his head, and he might be the only one to be able to find the sniper’s nest. With a new wife and family, Lucas Page has no interest in helping the FBI–except for the fact that the victim was his former partner.

Agreeing to help for his partner’s sake, Page finds himself hunting a killer with an unknown agenda and amazing sniper skills in the worst of conditions. And his partner’s murder is only the first in a series of meticulously planned murders carried out with all-but-impossible sniper shots. The only thing connecting the deaths is that the victims are all with law enforcement–that is until Page’s own family becomes a target.

To identify and hunt down this ruthless, seemingly unstoppable killer, Page must discover what hidden past connects the victims before he himself loses all that is dear to him.

8 thoughts on “On the Horizon – city of windows (Robert Pobi)”