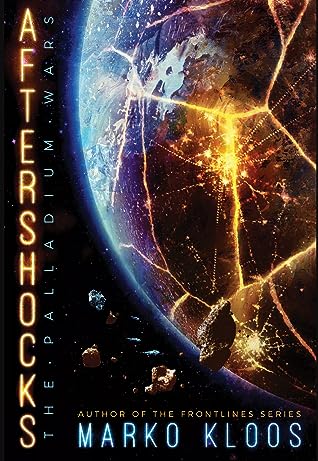 Okay mateys, I know I haven’t even finished Marko Kloos’ Frontlines series and yet here I be starting another series by him.  I have no regrets.  I picked this up and devoured it in one sitting.  It also helps that it be under 300 pages.

In this book a nasty war has ended and it has been five years since the peace treaty.  But peace seems to be faltering.  This series has multiple points of view.  Ye follow four perspectives:

Like the first book in the Frontline series, this one was enjoyable entertainment of the popcorn fluff type.  Nothing wrong with that.  These characters are all likeable in their own ways and I was rooting for them all even when they were at cross-purposes.  Aden was me favourite.  The world-building was sufficient and the plot was fun but the characters were the driving force for me.  The peace is about to destruct and I want to know what happens next!

Be advised that this has a major cliffhanger ending that had me surprised at the abruptness and wanting more.  For those crew members who dislike these, mehaps wait until more books are released.  I will be reading them as they come.  Arrr!

A solar system fights to survive and reform in the wake of war, but the real battle is about to begin.

Across the six-planet expanse of the Gaia System, the Earthlike Gretia struggles to stabilize in the wake of an interplanetary war. Amid an uneasy alliance to maintain economies, resources, and populations, Aden Robertson reemerges. After devoting fifteen years of his life to the reviled losing side, with the blood of half a million casualties on his hands, Aden is looking for a way to move on. He’s not the only one.

A naval officer has borne witness to inconceivable attacks on a salvaged fleet. A sergeant with the occupation forces is treading increasingly hostile ground. And a young woman, thrust into the responsibility as vice president of her family’s raw materials empire, faces a threat she never anticipated.

Now, on the cusp of an explosive and wide-reaching insurrection, Aden plunges once again into the brutal life he longed to forget. He’s been on the wrong side of war before. But this time, the new enemy has yet to reveal themselves…or their dangerous endgame.

15 thoughts on “On the Horizon – aftershocks (Marko Kloos)”