Ahoy there me mateys!  For those of ye who are new to me log, a word: though this log’s focus is on sci-fi, fantasy, and young adult, this Captain does have broader reading tastes.  Occasionally I will share some novels that I enjoyed that are off the charts (a non sci-fi, fantasy, or young adult novel), as it were.  So today I bring ye a science biography (with some disclaimers)!

Side note: the book cover comes from Goodreads and ye can click on it to add the books to yer Goodreads’ Ports for Plunder List. 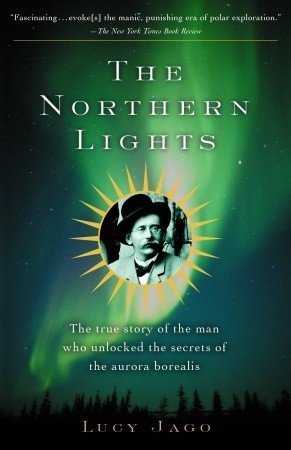 the northern lights: the true story of the man who unlocked the secrets of the aurora borealis

Well mateys, I be back from me sea travels for the moment.  I know the crew missed me.  For those that weren’t paying attention, I forayed into the wilds of Iceland, Norway, Scotland, and England.  I will be sharing some of the secrets learned in these ports at a later date.  In the meantime, what better way to celebrate the successful conclusion of me mission then with a highlight of the book that I read at the beginning of me journey.  Arrrr!

Now I didn’t get to see the aurora borealis during me time in the land of the midnight sun but I very much enjoyed this book.  It delves into the life of Kristian Birkeland and his exploration of the phenomena of the northern lights.  This scientist did not really get the recognition he deserved during his lifetime because his understanding of scientific phenomenon was ahead of its time.  Plus other silly academics just didn’t like him.  I have to admit that I didn’t understand all the science data meself because physics is not me friend.  But I found this book fascinating nonetheless.  I won’t really try to reiterate the plot because I would fail but I thought instead I would share one of me favourite quotes.

Birkeland understood for the first time why the Lights had defied neat explanation: they appeared not to belong to Earth but to space. Seemingly beyond human comprehension, they reached straight into the souls of those who witnessed them as an appearance of the angelic host or the Holy Spirit might do. The glowing banners in the sky were so entrancing that the group forgot the cold and remained outside, entering the hut occasionally to eat or drink but re-emerging to watch the breathtaking display dancing over their heads.

However there is a disclaimer about this read.  Readers beware.  This book is not an academic text and liberties were taken.  As the author says in her introduction:

There was initial alarm when I read these and I almost chose to not read it.  But I did want to know more about the subject and had no other book at hand.  So I chose to read this more as historical fiction for these reasons.

The author does have his own work called “The Norwegian Aurora Polaris Expedition 1902–1903.”  In addition, a later book about the scientist was published in 2005 called “Kristian Birkeland, The First Space Scientist.”  These might be better places to start, though I haven’t read either.  Arrrr!

Side note:  I was on a deadline with the ma to finish this book and she definitely beat me to the punch and finished first (before I even started!).  This has never happened before.  A win for Maman!  She loved this book.

Throughout the ages, the lights of the aurora borealis were believed to be messengers of gods, signs of apocalypse, or souls of the dead; even the most sophisticated scientists misapprehended their cause. Now Lucy Jago tells the story of the science–and the romance–behind the Northern Lights as she traces the grand adventure of the life of the visionary Norwegian scientist Kristian Birkeland.

At the age of thirty-one, Birkeland set out on a lifelong, increasingly compulsive quest to discover the origins of the aurora borealis. He traveled across some of the most forbidding landscapes on Earth, from the ice mountains of Norway to the deserts of Africa, against a backdrop of war and political upheaval. Along the way, Birkeland made some remarkable discoveries and inventions, such as the idea of hearing aids for deaf patients; of making caviar from cod roe; and of using the force of cathode rays to propel rockets. No country’s armed forces ever adopted his electromagnetic cannon, but the technology has since been adapted and extended to make “railguns” (electromagnetic mass accelerators) for the American Strategic Defense Initiative–the so-called “Star Wars” Defense.

Ultimately, Kristian Birkeland’s obsession with the workings of the cosmos cost him his health, his happiness, and his sanity–perhaps even his life. He spent his final days in exile in Egypt, and died in 1917 in Japan, under suspicious circumstances, his groundbreaking theories unheralded; he was cheated of the Nobel Prize by a rival. But now Birkeland’s ideas are considered to have been prophetic, and they have furthered our understanding not only of the Northern Lights but also of electromagnetism, comets, and the sun.

Exhaustively researched and thrillingly told, the previously unknown story of Kristian Birkeland is an enthralling–and enlightening–saga.