Ahoy there me mateys!  This tale be described by Goodreads as “a fantastical crime novel set in an alternate Seoul where assassination guilds compete for market dominance. Perfect for fans of Han Kang.”  I love Han Kang.  I love assassins.  I love translated works.  I love the cover: 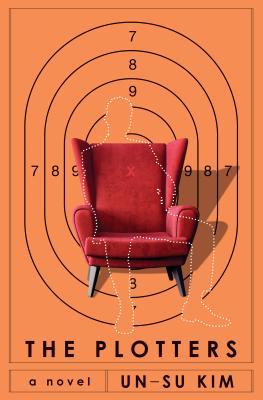 I loved Fiction Fan’s awesome review which led me to this fun read.  She said:

I’m not sure if I’ve made this sound as appealing as it deserves. I found it compulsively readable and, despite the apparent bleakness of the subject matter, full of humour and emotional warmth. I highly recommend it as something different from the usual run of things – well written, well plotted and ultimately strangely satisfying.

There is no doubt that this book is odd and quirky.  I highly enjoyed it.  This is the story of an assassin named Reseng who is part of a specialized group of assassins whose existence is a thinly veiled secret and whose trade was governed by an elaborate system of rules under the old dictatorship.  But the new democracy is here and with it a change of the societal norms.  The assassin code of ethics is over and someone is out to kill the competition.

Reseng is skilled as an assassin but is rather naive when it comes to the rest of Seoul and how normal people work.  That’s what happens when ye be raised from childhood to kill.  So when he finds himself a target, he chooses to figure out why and how he ended up becoming the contract.  It is this deeper look into Reseng’s life and the world of assassins that became fascinating.  The fact that a very unusual library is used as front for the business was a big bonus.  It was also interesting that Reseng is a sympathetic character despite his stance on killing.

I can’t really explain more than that about the plot.  For all the complexities of the world-building and assassin lifestyles, this was a well-crafted book that was not difficult to read.  There were many wonderful and memorable characters.  I absolutely loved the resolution and Reseng’s journey.  I think that both the author and the translator, Sora Kim-Russell, deserve a lot of praise for their work.  If the idea of this book intrigues, then I suggest ye give it a chance.  Arrrr!

Goodreads has this to say about the novel (shortened by me because of spoilers):

Behind every assassination, there is an anonymous mastermind–a plotter–working in the shadows. Plotters quietly dictate the moves of the city’s most dangerous criminals, but their existence is little more than legend. Just who are the plotters? And more important, what do they want?

Reseng is an assassin. Raised by a cantankerous killer named Old Raccoon in the crime headquarters “The Library,” Reseng never questioned anything: where to go, who to kill, or why his home was filled with books that no one ever read. But one day, Reseng steps out of line on a job, toppling a set of carefully calibrated plans. And when he uncovers an extraordinary scheme . . . Reseng will have to decide if he will remain a pawn or finally take control of the plot.

Crackling with action and filled with unforgettable characters, The Plotters is a deeply entertaining thriller that soars with the soul, wit, and lyricism of real literary craft.