Ahoy there me mateys!  For those of ye who are new to me log, a word: though this log’s focus is on sci-fi, fantasy, and young adult, this Captain does have broader reading tastes.  Occasionally I will share some novels that I enjoyed that are off the charts (a non sci-fi, fantasy, or young adult novel), as it were.  So today I bring ye a memoir with cool fish facts!

Side note: the book cover comes from Goodreads and ye can click on it to add the books to yer Goodreads’ Ports for Plunder List. 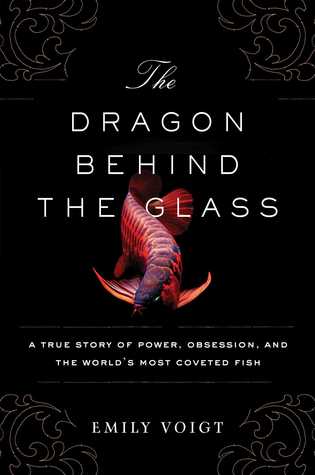 the dragon behind the glass: a true story of power, obsession, and the world’s most coveted fish

Okay I now kinda have a thing for books that combine memoirs with science and fun animal facts.  So far, I have read about ravens, hawks, owls, octopuses, and snails (seriously snails are AMAZING).  I like fish and think they are cool denizens of the deep.  With a name like dragon fish, I had to know more.  Like this:

The Asian arowana is the world’s most expensive aquarium fish. It is a tropical freshwater fish from Southeast Asia that grows three feet long in the wild. That’s roughly the size of a snowshoe.  It is a fierce predator dating back to the age of the dinosaurs. It has large, metallic scales, like coins; whiskers that jut from its chin; and it undulates like the paper dragons you see in a Chinese New Year’s parade. That resemblance has spawned the belief that the fish brings good luck and prosperity, which is why it has become a highly sought-after aquarium fish.  source

I absolutely loved the beginning of the book and the introduction to the weird world of high priced aquarium fish.  When I had guppies and tetras as a kid, I never questioned where the pet store got them.  Now I know.  I also know that there is a fish beauty pageant called the Aquarama International Fish Competition.  I learned that a man named Kenny the Fish is one of the biggest fish sellers in the world . . .

Kenny the Fish posing nude with fish. Tried this for author photo but fish bags too slippery. pic.twitter.com/JNNIrBXqcZ

So while the fish facts were excellent, I did have problems with the memoir part of the story.  The author went on a search for wild dragon fish.  This took up the majority of the book and seemed rather bland.  Part of the problem is that it felt mostly like a listing of the people she met and the places that she went.  It seemed more about the lengths the author went to try and set up trips.  I never really got a feel for the scenery of the countries or people she met.  The descriptions were so vague at times that some of the people and places could have been swapped and it wouldn’t have mattered.  I did think her brief insight into wildlife protection laws were very interesting.

The most tantalizing bits: the murder of the fish store owner, the illegal animals of New York City, and fish surgery were glossed over.  The minutiae of the author’s personal travel struggles were not.  I wanted more fish and less author story.  This is never a good sign for a memoir.  I am glad I learned about the fish but ye could read the National Geographic article that I found and basically get a very nice overview of the good parts of the book.  Arrr!

A journalist’s quest to find a wild Asian arowana — the world’s most expensive aquarium fish—takes her on a global tour through the bizarre realm of ornamental fish hobbyists to some of the most remote jungles on the planet.

A young man is murdered for his prized pet fish. An Asian tycoon buys a single specimen for $150,000. Meanwhile, a pet detective chases smugglers through the streets of New York. Delving into an outlandish world of obsession, paranoia, and criminality, The Dragon Behind the Glass tells the story of a fish like none other. Treasured as a status symbol believed to bring good luck, the Asian arowana, or “dragon fish,” is a dramatic example of a modern paradox: the mass-produced endangered species. While hundreds of thousands are bred in captivity, the wild fish has become a near-mythical creature. From the South Bronx to Borneo and beyond, journalist Emily Voigt follows the trail of the arowana to learn its fate in nature.

With a captivating blend of personal reporting, history, and science, Voigt traces our fascination with aquarium fish back to the era of exploration when intrepid naturalists stood on the cutting edge of modern science, discovering new species around the globe. In an age when freshwater fish now comprise one of the most rapidly vanishing groups of animals, she unearths a surprising truth behind the arowana’s rise to fame—one that calls into question how we protect the world’s rarest species.

An elegant examination of the human conquest of nature, The Dragon Behind the Glass revels in the sheer wonder of life’s diversity and lays bare our deepest desire—to hold on to what is wild.

the dragon behind the glass – Book

13 thoughts on “Off the Charts – the dragon behind the glass (Emily Voigt) – no not that kinda dragon!”