Ahoy there me mateys! I received this sci-fi eARC from NetGalley in exchange for an honest review.  So here be me honest musings . . .

Title: her silhouette, drawn in water 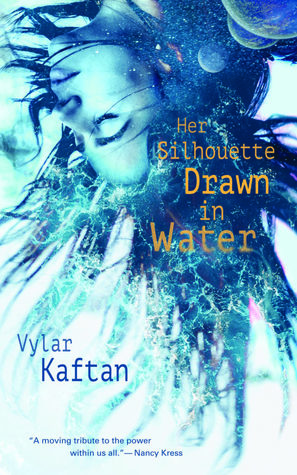 This novella is about two telepaths trying to survive in a prison planet.  One, the protagonist Bee, is determined to escape even though her memory is faulty and she can’t even remember why she was sentenced.  The other, Chela, is only focused on day-to-day survival and refuses to discuss much of the past.  The prison that they are in happens to be a cave system inhabited by bug swarms.  The two women rely on each other and their love to keep sane.  Bee suspects a secret behind the prison and is surprised to one day hear the voice of a new telepath.

This was an uneven read for me.  I absolutely loved the entire beginning in the prison and the introduction of the third telepath.  But the book started to break down once Bee learns the truth.  I can’t get into the rest of the plot because of major spoilers.  Let’s just say that the book took several interesting and unexpected turns.  Which was awesome.  Unfortunately, the world-building wasn’t strong enough to support them.

Though I loved Bee, the other characters really felt two-dimensional.  The politics of the world were barely hashed out and slightly nonsensical.  Bee’s journey of self-discovery was interesting but the format of the plot made it hard to follow at times.  There were deep themes involved but none seemed to be explored in any meaningful way.  The theme that had the most success was the investigation into love due to the variety of types that were covered and some of the unusual circumstances Bee found herself in.

While I am ultimately glad to have read this one due to the interesting concepts and writing style, I think that overall this story would have been better served in a longer format.

All Bee has ever known is darkness.

She doesn’t remember the crime she committed that landed her in the cold, twisting caverns of the prison planet Colel-Cab with only fellow prisoner Chela for company. Chela says that they’re telepaths and mass-murderers; that they belong here, too dangerous to ever be free. Bee has no reason to doubt her—until she hears the voice of another telepath, one who has answers, and can open her eyes to an entirely different truth.

her silhouette, drawn in water – Book

8 thoughts on “On the Horizon – her silhouette, drawn in water (Vylar Kaftan)”