Ahoy there me mateys!  I received this short story collection eARC from NetGalley in exchange for an honest review.  So here be me honest musings . . . 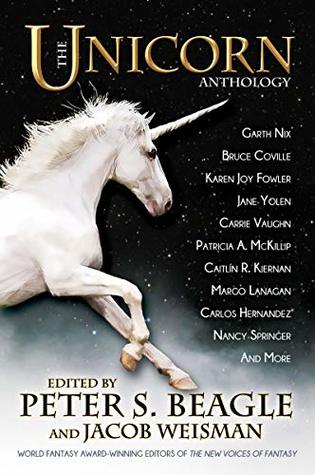 So ye scalawags, many of ye likely know about me first love, horses, before the sea stole me heart.  So of course I was also obsessed with unicorns, too.  Peter S. Beagle’s, the last unicorn is one of me favourite books along with the joyful animated movie of the same name.  So when I saw that there be a new unicorn anthology out, I knew I had to read it.  Many of these stories have appeared in other places and were not new to me.  For me this anthology was uneven.  But I do have several from this collection that are now new favourites:

“The Magical Properties of Unicorn Ivory” (Carlos Hernandez) – I absolutely loved this reporter’s article of the first time she gets to see a unicorn in the wild.  The ending was unexpected and poignant.  Beautiful.

“The Brew” (Karen Joy Fowler) – This is about what happens when ye brew something using unicorn horn and how the mixture changes the life of two young teens.  The use of memory in this story was lovely.  Apparently this story was in immortal unicorn volume 2 but I don’t remember reading it back then.  Glad to be reintroduced.

“Falling Off the Unicorn” (David D. Levine and Sara A. Mueller) – This story is about an older teen riding the unicorn show circuit at the top level.  It explores the main character, Missy’s, conflicting relationship with the sport.  Plus there is a lovely romance.

“A Hunter’s Ode to His Bait” (Carrie Vaughn) – I love other works by this author but this story just gave me the creeps and I did not like it.  It is a sensual look at the use of a young virgin as bait, hunting unicorns, and the changing relationship between the hunter and his bait.  Ugh.

“Ghost Town” (Jack C. Haldeman II) – This was so good.  It is about a guy who ends up in the middle of nowhere and what he discovers about himself in this ghost town.  Basically a lovely story about turning points and life-defining choices.

“A Thousand Flowers” (Margo Lanagan) – I previously read this story in zombies vs. unicorns.  This was still a miss for me.  I actually enjoyed the writing style immensely and was drawn into the mystery.  But the plot faltered, narrators changed, and the bestiality in this was not to me taste.

“Stampede of Light” (Marina Fitch) – I loved this story!  This is the tale of what happens to lost children and the teachers who make a difference.  I thought the unicorns in this were awesome.  This may have been me favourite of the collection.

“The Highest Justice” (Garth Nix) – This was another story from zombies vs. unicorns.  I loved rereading it.

“The Lion and the Unicorn” (A. C. Wise) – This was an odd story that I didn’t like.  The unicorn and lion are trapped as slaves.  The lion is trying to escape. The unicorn is basically used for sex via rape.  It was an uncomfortable story.

“Survivor” (Dave Smeds) – I read this story in immortal unicorn volume 2.  The unicorn is a tattoo with unexpected consequences.  I enjoyed rereading this one.

“Homeward Bound” (Bruce Coville) – This was another miss for me.  I usually like Coville’s writing but I didn’t connect with this story at all.

“Unicorn Triangle” (Patricia A. McKillip) – I am not a McKillip fan so this one was bound to not be for me.  But I found that I did love the beginning up to the half-way point before it bombed.  I consider that a win.

“My Son Heydari and the Karkadann” (Peter S. Beagle) – I enjoyed this story about unicorns in Persia.  The unicorns hate elephants.  Humans hate the unicorns.  This be the story of what happens when a young boy tries to help one of the beasts.

“The Transfigured Hart” (Jane Yolen) – Tachyon Publications previously released this story as a novella which I adored.  See that review here!

“Unicorn Series” (Nancy Springer) – This is a poem in eight parts.  I don’t really get poetry but thought this was pleasant enough.

Out of the 16 stories I liked 6 of the new ones and still loved 3 of the tales known previously.  I didn’t like 6 of the new ones and 1 previously read before.  So about half of this collection floated me boat.  In addition to the stories, there is also a lovely introduction by Peter S. Beagle on what it be like to be known as the “unicorn guy”.  If ye haven’t read any of these stories previously then I do think this could be a good place to start.  Arrrr!

Goodreads’ website has this to say about the book:

Unicorns: Not just for virgins anymore. Here are sixteen lovely, powerful, intricate, and unexpected unicorn tales from fantasy icons including Garth Nix, Peter S. Beagle, Patricia A. McKillip, Bruce Coville, Carrie Vaughn, and more. In this volume you will find two would-be hunters who enlist an innkeeper to find a priest hiding the secret of the last unicorn. A time traveler tries to corral an unruly mythological beast that might never have existed at all. The lover and ex-boyfriend of a dying woman join forces to find a miraculous remedy in New York City. And a small-town writer of historical romances discovers a sliver of a mysterious horn in a slice of apple pie.

To visit the authors’ websites go to:

To buy the collection go to: