Ahoy there me mateys!  I received this middle grade fantasy eARC from NetGalley in exchange for an honest review.  So here be me honest musings . . .

Title: the assassination of brangwain spurge 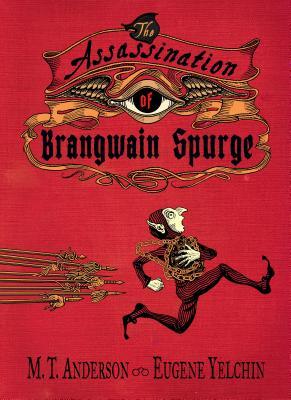 This be a goofy little book about goblin/elf relations as told through the experiences of two scholar-historians.  It sounds odd and it is but it is full of quirky delight.

On one side ye have the elf, Brangwain Spurge.  His nickname in school was “the Weed” but since his school days he became a rather upright fellow.  He has been tasked with taking a goblin artifact back to the goblins in the name of peace.  While Spurge has sworn to uphold his duty to the king, his superiors have ulterior motives that may actually lead Spurge to uphold his oath “to the death.”

On the other side ye have the goblin, Werfel.  He has been selected to be Spurge’s host and how he carries out those duties reflects on all goblin-kind.  From trying to procure food for the elven palate, to making sure the sheets are just so, to trying to show off the best that the goblin kingdom has to offer, Werfel is determined to do his utmost best.  It is endearing and fabulous to watch Werfel try to impress and comfort his elven counterpart.

Seriously, Werfel is adorable.  All he wants to do is swap stories with Spurge and become friends.  The story is told from his point of view.  The misunderstandings and shenanigans are delightful.  And yet Werfel does his duty, above and beyond really, when things all start to go wrong.

This book does have illustrations which are supposed to show Spurge’s point of view but I didn’t get to see many of them in me arc copy.  Yet what I did see was whimsical and silly.  Additionally there are excellent letters to the king from his spymaster updating Spurge’s progress.  They crack me up.  I need to get me hands on a hardcopy.  Because this book does deserve a second look.

This silly story does prove to have greater heart and purpose.  The message is one of friendship, overcoming cultural misunderstandings, how historical events have more than one viewpoint, and above all trying for peace in an uncertain future.  Werfel captured me heart and even stick-in-the-mud Spurge is viewed fondly in the end.

Side note: Also thank you to matey Millie @ milliebotreads for letting me know about this book’s existence.  Arrr!

Uptight elfin historian Brangwain Spurge is on a mission: survive being catapulted across the mountains into goblin territory, deliver a priceless peace offering to their mysterious dark lord, and spy on the goblin kingdom — from which no elf has returned alive in more than a hundred years. Brangwain’s host, the goblin archivist Werfel, is delighted to show Brangwain around. They should be the best of friends, but a series of extraordinary double crosses, blunders, and cultural misunderstandings throws these two bumbling scholars into the middle of an international crisis that may spell death for them — and war for their nations. Witty mixed media illustrations show Brangwain’s furtive missives back to the elf kingdom, while Werfel’s determinedly unbiased narrative tells an entirely different story. A hilarious and biting social commentary that could only come from the likes of National Book Award winner M. T. Anderson and Newbery Honoree Eugene Yelchin, this tale is rife with thrilling action and visual humor . . . and a comic disparity that suggests the ultimate victor in a war is perhaps not who won the battles, but who gets to write the history.

To visit the authors’ websites go to:

the assassination of brangwain spurge – Book

13 thoughts on “On the Horizon – the assassination of brangwain spurge (M.T. Anderson & Eugene Yelchin)”