Ahoy there me mateys!  This was an young adult fantasy audiobook that I picked up because it takes place in a magical Venice, the author is German, and it has a wonderful cover: 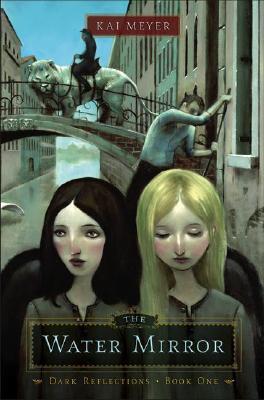 I loved the setting of the book.  The story takes place in an alternate magical Venice.  The world is ruled by the Egyptian Pharaoh who controls mummies and flying ships.  The exception is Venice, a city whose waters are protected by the Flowing Queen.  Mermaids and living stone lions are only some of the creatures that call the city home.  This book tells the tale two children who apprentice with rival masters and stumble across a plot to destroy the Queen and allow the city to be overthrown.  One is Merle, who apprentices with a mirror maker.  The other is Serafin, an ex-thief apprenticed to a cloth maker.

The concepts of this story were very fun.  I loved the murderous mermaids in the canals.  I loved the living, breathing stone lions that guard the city.  I thought the mirror magic was interesting and loved how it was used to make a blind girl see.  I thought both Merle and Serafin were interesting characters.  So what was the problem?  The plot.

This story was all over the place.  While the world building was interesting, the author didn’t really use it to good effect.  It started out with an awesome friendship between two dissimilar girl orphans who end up with the same apprenticeship with a mirror magician.  I thought it was going to be about the two friends on adventures with the mirrors as the plot points.  But the author quickly dumps the second girl from the story and instead adds in a boy and hints of a young crush.  Then ye get odd historical info-dumping, plot points that make no sense, meanderings to no purpose, and a Queen that was not only bizarre but annoying.

I ended up mostly being confused and unhappy with the outcome of it all.  The book overall seemed to be just a set-up to a bigger story and nothing truly interesting happens with any of the fantastical elements.  The ending was abrupt and seems to be heading towards a cliche, boring and silly conflict.  I will not be reading and more of this series or any of the author’s other works.

For me this one walks the plank!  Arrrr!

In Venice, magic is not unusual.  Merle is apprenticed to a magic mirror maker, and Serafin — a boy who was once a master thief — works for a weaver of magic cloth.  Merle and Serafin are used to the mermaids who live in the canals of the city — beautiful creatures with hideous mouths that split their faces from ear to ear — and to the guards who patrol the streets on living stone lions.  Merle herself possesses something magical: a mirror whose surface is water.  She can reach her whole arm into it and never get wet.  But Venice is under siege by the Egyptian Empire; its terrifying mummy warriors and flying sunbarks are waiting to strike.  All that protects the Venetians is the Flowing Queen.  Nobody knows who or what she is — only that her power flows through the canals and keeps the Egyptians at bay.  When Merle and Serafin overhear a plot to capture the Flowing Queen, they are catapulted into desperate danger.  They must do everything they can to rescue the Queen and save the city — even if it means getting help from the Ancient Traitor himself.  Kai Meyer’s bold, original fantasy conjures up a land of magic and menace as Merle and Serafin begin a journey to unimagined realms in the extraordinary world of Dark Reflections.

10 thoughts on “Walk the Plank – the water mirror (Kai Meyer)”