Ahoy there me mateys!  I have noticed this evocative cover . . . 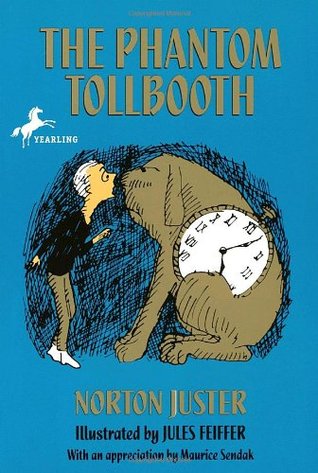 . . . time and time again since I was a young’un’.  But for reasons that escape me now, I never did pick it up.  But I have always had intentions to read it.  Well then two of me crew in rather quick succession wrote their thoughts about it and solidified me desire to read it.  And so I have.

For such a short book, it took me a rather long time to read because I had to savor it in delightful little bits.  This novel truly deserves the designation of a classic.  The story is silly and seemingly simple but oh what delightful use of language.  I loved the evocative illustrations by Jules Feiffer and how even the type on the page helps to tell the story.  It is the kind of book with clever layers that make it a lovely read for people of all ages.

“Do all those words mean the same thing?” gasped Milo. “Of course.” “Certainly.” “Precisely.” “Exactly.” “Yes,” they replied in order. “Well, then,” said Milo, not understanding why each one said the same thing in a slightly different way, “wouldn’t it be simpler to use just one? It would certainly make more sense.” “Nonsense.” “Ridiculous.” “Fantastic.” “Absurd.” “Bosh,” they chorused again, and continued. “We’re not interested in making sense; it’s not our job,” scolded the first. “Besides,” explained the second, “one word is as good as another—so why not use them all?”

I would like to visit the Doldrums where sleeping is a priority.  Wouldn’t ye want items on yer schedule like this:

The language is literally delicious.  I wish I could have had a phantom tollbooth as a child!

Check out me two crew members effusive reviews that finally got me to read this one:

Hailed as “a classic. . . . humorous, full of warmth and real invention” (The New Yorker), this beloved story -first published more than fifty years ago- introduces readers to Milo and his adventures in the Lands Beyond.

For Milo, everything’s a bore. When a tollbooth mysteriously appears in his room, he drives through only because he’s got nothing better to do. But on the other side, things seem different. Milo visits the Island of Conclusions (you get there by jumping), learns about time from a ticking watchdog named Tock, and even embarks on a quest to rescue Rhyme and Reason! Somewhere along the way, Milo realizes something astonishing. Life is far from dull. In fact, it’s exciting beyond his wildest dreams. . . .

To visit the author’s wiki page go to: