Ahoy there me mateys!  I am assuming that most of me crew has heard of Anne McCaffrey.  I read a lot of her work when I was a younger lass.  So when I was perusing some used books that be for sale, I snagged a copy of this short novel.  I had never heard of it and it has a funny looking cat like creature on the cover: 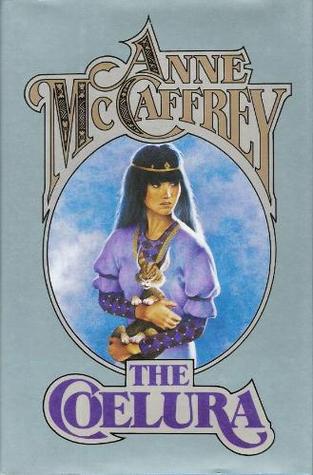 The edition I picked up was published by Tor in 1987.  It is a hardback and part of its appeal were the 50 black and white illustrations by Ned Dameron.

It is an odd little snippet of a story.  Lady Caissa is the body-heir for her father.  Her father helps rule the planet of Demeathorn.  As body-heir, Caissa owes him strict obedience – especially in the matter of producing the next heir.  But when her father proposes his pick of suitor, Caissa is appalled at how inappropriate the choice is and wonders what scheme her father is participating in now.  So she decides to find out.  Will she be a dutiful daughter or will she revolt?

Part of that scheme involves the coelura.  I don’t even know how to describe them.  After reading this book, I still be completely confused as to what one is. They certainly don’t look like the cat creature from the cover.  The illustrations don’t really do them justice.  It was perplexing.

The illustrations, while super fun, were rather odd.  Sometimes they seemed to match an element of the story.  Sometimes I couldn’t figure out what they were supposed to portray.  They were not always placed near the section of the book being described.  In fact, often they were scattered in seemingly random order.

I enjoyed this novel but ended up being mostly confused.  As McCaffrey’s writing is usually crystal clear and rich in detail, this seemed unusual.  But instead of being frustrated, I still very much enjoyed the odd experience and the puzzle of it.  I can’t recommend the story, such as it was, but I am glad I own this particular book and will certainly revisit it in the future.

The Lady Caissa, heir to the Ambassador of the Federated Sentient Planets to the world Demeathorn, had grown up knowing that she owed her sire obedience and unconditional loyalty. She was expected to do her duty, even to the extent of entering into a marriage alliance she did not understand with a man she despised. Lady Caissa, beautiful, rich, and well-educated, had never learned the great secret of Demeathorn, although she was about to be caught in its spell.

In the aftermath of disastrous diplomatic negotiations, she fled north toward interdicted territory. A distress signal from deep within the forbidden zone drew her to a rocky island where she would encounter a man alone: intense, handsome, and severely injured in the crash of his antique flyer. Lady Caissa did not know it, but she had just set in motion events which would determine the fate of her family, her planet…and her happiness.

4 thoughts on “The Captain’s Log – the coelura (Anne McCaffrey)”