Ahoy there me mateys!  Though this log’s focus is on sci-fi, fantasy, and young adult, this Captain does have broader reading tastes. So occasionally I will share some novels that I enjoyed that are off the charts (a non sci-fi, fantasy, or young adult novel), as it were. I received this non-fiction eARC from NetGalley in exchange for an honest review.  So here be me honest musings . . .

Title: the stowaway: a young man’s extraordinary adventure to antarctica 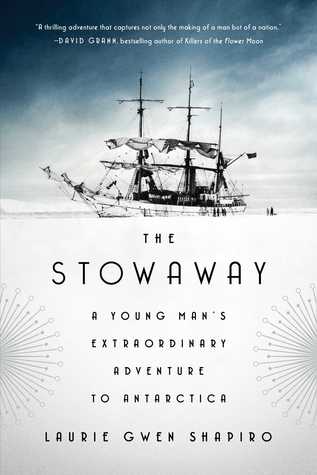 This novel was recommended by stephanie @ adventuresofabibliophile.  The title and cover immediately captured me fancy.  Stowaways and a ship!  Arrr!  It takes place in the 1920s which is a bonus.  Also me adventurous ma is currently on a ship heading for Antarctica and penguins and cold!  So it seemed appropriate to read about previous Antarctic explorers.

While I prefer sunnier climes, I have always had a fascination for exploration stories of all kinds be it mountain climbin’, island hoppin’, or south pole ice scramblin’.  As a younger lass I read about Shackleton, Darwin, and Cook’s true life adventures.  National Geographic magazine was a much loved publication.  Equally beloved were the fictional survival stories like White Fang, Robinson Crusoe, and the Count of Monte Cristo.  I continue to love these types of stories like recent reads castle of water and feel me fall (highly recommended).

So I began to read this book about Billy Gawronski who was so obsessed with being a member of Byrd’s crew that he was a stowaway on Byrd’s ships not once but three times!  His tenaciousness and pure grit to make it to Antarctica was endearing and fun.  He wasn’t the only one trying to secure a place on this expedition.  Byrd was a crafty man and had thousands of candidates trying to obtain a non-paying berth on the voyage attempting to make American history.

Overall I found this to be a more a story about the facts surrounding getting to and from Antarctica rather than what happened on Antarctica.  It is a seemingly well-researched book.  Much like in real life, Byrd really is the center of the story with Billy’s portions as the more humanistic filler.  The beginning of the book up until the establishment of Little America is the best part of the book though the story loses steam after that.  In any case I found many of the tangential facts to be fascinating.  Like how President Coolidge had a pancake breakfast with actresses in an attempt to bolster his election campaign.  This book was a quick read that I enjoyed even if I thought it would be more about Billy’s adventures in Antarctica.

Side note: the author has a marvelous article in the New Yorker about “the Stowaway Craze.”  It even shows a photo of Billy!  What fun!

The spectacular, true story of a scrappy teenager from New York’s Lower East Side who stowed away on the Roaring Twenties’ most remarkable feat of science and daring: an expedition to Antarctica.

It was 1928: a time of illicit booze, of Gatsby and Babe Ruth, of freewheeling fun. The Great War was over and American optimism was higher than the stock market. What better moment to launch an expedition to Antarctica, the planet’s final frontier? There wouldn’t be another encounter with an unknown this magnificent until Neil Armstrong stepped onto the moon.

Everyone wanted in on the adventure. Rockefellers and Vanderbilts begged to be taken along as mess boys, and newspapers across the globe covered the planning’s every stage. And then, the night before the expedition’s flagship set off, Billy Gawronski—a mischievous, first-generation New York City high schooler desperate to escape a dreary future in the family upholstery business—jumped into the Hudson River and snuck aboard.

Could he get away with it?

From the soda shops of New York’s Lower East Side to the dance halls of sultry Francophone Tahiti, all the way to Antarctica’s blinding white and deadly freeze, Laurie Gwen Shapiro’s The Stowaway takes you on the unforgettable voyage of a plucky young stowaway who became a Jazz Age celebrity, a mascot for an up-by-your bootstraps era.