Ahoy there me mateys!  Yesterday I shared me second reflections of the last dragonslayer and discovered there was a book three in the series that I haven’t read!  So I decided to remedy that.  But of course that meant taking a second look at book two first and giving me crew me second reflections, as it were, upon visitin’ it again . . .

the song of the quarkbeast – Jasper Fforde 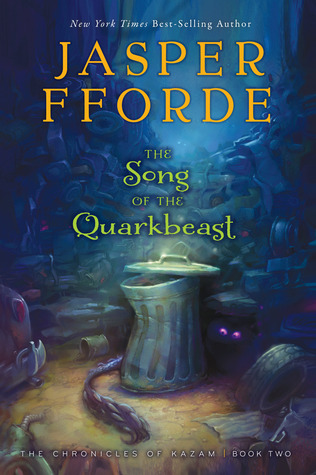 This be a fun second foray into the Ununited Kingdoms.  Magic is on the rise but there be a fight to see who will control it.  And what better way to come up with a winner then a duel!  In this case it is Jennifer and the Kazam agency versus their competition, the iMagic agency.  There is a bridge that needs to be repaired and each has a half of it to fix.  Whoever finishes their part of the bridge first wins?  Easy right?

Well maybe not when yer magicians keep disappearing, a quarkbeast is on the run, and silly politics are getting in the way.  This was filled with more delightful shenanigans, quirky characters, and absolutely silly situations.  I loved to see Jennifer back in action.

While I do think book one is the stronger book, this is still fun if not quite as good.  It is just fluffy fun with no bigger purpose.  But I enjoyed it and want more.  Onto book three!  Arrr!

Long ago, magic began to fade, and the underemployed magicians of Kazam Mystical Arts Management have been forced to take any work their sixteen-year-old acting manager, Jennifer Strange, can scare up. But things are about to change. Magical power is finally on the rise, and King Snodd IV, of the Ununited Kingdoms knows that he who controls magic controls everything. Only one person stands between Snodd and his plans for a magic-grab–and that’s Jennifer.

Yet even smart and sensible Jennifer would have trouble against these powers-that-be. The king and his cronies will do anything to succeed–including ordering a just-might-be-rigged contest between Kazam and iMagic, Kazam’s only competitor in the magic business. With underhanded shenanigans afoot, how can Kazam possibly win?

Whatever happens, one this is certain: Jennifer Strange will not relinquish the noble powers of magic without a fight.

the song of the quarkbeast – Book