Title: the dark of the moon 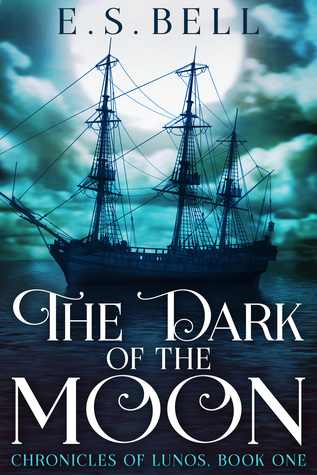 Arrrrrr mateys!  Ships, magic, islands, assassins, dragon-kind, merfolk, gods, and so much more.  Of course the cover drew me in but the main idea in this book is what tickled me fancy.

A woman named Selena possesses magic in exchange for service to the Two-Faced God.  Ten years prior to this story, Selena used her magic to destroy a naval army.  Only she lost control and killed the hundreds of innocents she was meant to save.  In retribution, the god marked her breast with an icy hole in the shape of a crescent moon.  The wound does not heal and Selena has never been warm since her mistake.  These ten years later, an order has come that may lead to her redemption.  She swore she would never kill again.  But will she if it means she might be warm at last?

So Selena was an excellent character.  I loved following her journey.  She does appear a bit naive at times but I chalked it up to being raised in a temple and the ramifications of that.  Her magic is awesome.  She can summon the sea and heal and such.  But because of her grievous mistake, she is wary of using her own power and it causes extreme internal conflict.  Her wound is creepy and otherworldly.  It is a void that she can put her hand into up to the elbow!  Cool and gross!

The other characters are also extremely fun and multi-faceted.  There is the assassin, Sebastian Vass, who has taken one final job to get out of the business altogether.  Snarky, intelligent, and ruthless.  There is Selena’s companion, Ilior, who is a dragon-like creature and her best friend and self-appointed protector.  Caring, stoic, and faithful.  There are bad folks who have actual reasons for being evil and other folks that I remain ambivalent about in the best ways possible.  Best of all, these characters change and grow as the plot progresses!

The world-building was lovely too.  I loved the island world and its reasons for existing.  I would certainly find adventure sailing in those waters.  Some more dangerous than others.  The religion of the world was very interesting.  The ramifications are only hinted at in this book but what ideas were there were thought-provoking, and to me mind, fun.

The only downsides for me were the somewhat uneven pacing and the romance.  The book is over 500 pages and there was a little too much filler for me taste.  Mostly at the beginning.  That said, the majority of the book kept me avidly flipping pages.  Also I would find meself thinking of the characters when I put the book down and would be excited to pick it up again.  So a minor grumble.

The romance itself was overall fine and it certainly isn’t all perfect rosy goodness all the time.  But I found meself wanting them to get over the angst.  Of course then I got a sex scene that just seemed out of place.  Again minor quibble.  I was glad when the deed was done.

I very much enjoyed the voyage and certainly want to read the next book which I believe comes out in 2018.  Arrrrr!

Side note: I only included part of the blurb because in me mind it be too spoilery.  And I couldn’t find the e-book version on sale.  But being as I read an e-book it’s likely out there somewhere.

Centuries ago, dragons broke the old world and scattered the pieces across the oceans. On this new world of islands swathed in seas, sailors are kings, and the moon god holds dominion…

Selena Koren is the moon god’s most powerful Paladin; a skilled warrior and blessed with the most potent magic. She also bears the god’s terrible wrath. Ten years before, during the bloody Zak’reth War, Selena summoned the seas to destroy her enemy’s armada. The Zak’reth screamed and drowned and died, but so too did four hundred innocents. In its fury, the god smote Selena with a terrible wound: a crescent-shaped hole in her chest that breathes its icy breath every moment of every day so that she never knows warmth.

Now, her temple sends Selena on a quest to kill two powerful dark priests. This alone, she is assured, will close her terrible wound. The thought of killing without provocation rattles her soul but Selena can suffer the cold no longer . . .

the dark of the moon – Book