Title: golden age and other stories 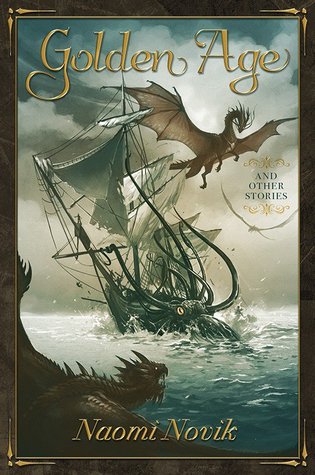 Ah the beautiful cover with both dragons and ships lured me in.  Arrrr!  The author, Naomi Novik, hooked me and had me super excited to read this collection of stories revisiting the dragon, Temeraire and his world.  This collection did not disappoint.  It contains 6 stories and 26 drabbles.  What is a drabble?  I’ll get to that . . .

This is a very short story about Temeraire trying to obtain the vote of Volly.  I am not quite clear on the whole voting plotline as I have yet to finish the whole Temeraire series but of course I like silly Volly and the story did entertain.

This story showcases John Wampanoag, an enterprising dragon trader.  Apparently he shows up later in the Temeraire books.  All I know is that this story was one of the highlights for me.  This is a colonial-era story with John’s navigation of both Native American and European factions.  Short yet sweet.

This story involves Jane Roland before the Battle of the Nile and the destruction of L’Orient.  Jane is a young captain trying to exert her influence on her male crew.  I adored her relationship with Excidium.  It is amazing that this story took place before the action of the battle and yet was exciting in its own right.

This fabulous story is a re-imaging of how Temeraire and Laurence meet.  Temeraire, called Celeste in this incarnation, is washed up on the shore of a seemingly deserted island.  The first part of the story is told from Celeste’s point of view about how he develops and what occurs on this island.  The second half is from Laurence’s point of view.  From battles at sea to fights with kraken to the burgeoning friendship of man and dragon, this one was a pure delight.

A lovely story that takes place in China and tells the story of Temeraire’s inception and the start to how his egg ends up meeting Laurence.  I loved the viewpoint of Qian and her viewpoint of the Chinese politics.  It shows such a different dragon culture from the European fighting forces centered one.

A Pride and Prejudice retelling with Elizabeth Bennett as a Captain with her own dragon.  Amazing.  ‘Nuff said.

Apparently a drabble according to the author is “a story of 100 words – and while there are many debates on how strictly this limit should be observed, for purposes of this collection I have kept to the exact number.”  The collection contains 26 of them.  These snippets were very interesting and well written but overall just left me wanting them to be longer.  Perhaps these will be turned into longer stories in the future.  Mulan with dragons anyone?  Yes please.

While I enjoyed this collection immensely, there was one flaw of the kindle edition – the artwork.  It was black and white which I did not mind for the historical feel of it.  But each image was so small and several were missing altogether.  I wish the art could have been enlarged when clicking on it so I could have seen the full details.  I am assuming that the hardback will have no such problems of course.  So if ye like dragons in general and Temeraire specifically, then pick this collection up!

Side note: the author’s website has larger versions of the artwork on it!  Hooray!  Reading by Amy Thompson is me favorite with Dragons in a Winter Clearing by Stephanie Mendoza being a close second.  Okay but the cover art by Sandara Tang is awesome.  That much wonderful dragon art . . . can’t complain.  Arrrr!

Subterranean Press’ website has this to say about the novel:

Naomi Novik ended her acclaimed, beloved nine-volume Temeraire series last year with a stunning finale, League of Dragons. Fans missing their favorite series can now rejoice: Novik returns with an original Temeraire collection as unique as the world she has created, with each tale inspired by an accompanying piece of fan art. The Temeraire novels provide a window into an alternate nineteenth century populated with Novik’s own richly human and unforgettably draconic characters as they adventure alongside well-known historical figures. That tradition continues here. Readers will delight at appearances by fan-favorite characters from the series and historical figures like the famed explorer Matteo Ricci. In “Planting Season,” Novik shows us an early glimpse of American dragon John Wampanoag at Boston Harbor. “Golden Age” finds a dragon who believes he remembers being called Celeste hatch from a shipwreck-tossed crate onto an island where he meets others of his kind. But other famous fictional characters are to be discovered here as well. Readers will certainly recognize a certain Miss Bennet (here Captain Bennet) and her suitor, Mr. Darcy, in “Dragons and Decorum.”Filled with the inventive world-building, rich detail, sparkling wit, and deep emotion that readers have come to expect from Novik’s work, Golden Age and Other Stories is a treasure at home on any Temeraire-lover’s bookshelf.

golden age and other stories – Book