Ahoy there mateys!  Members of me crew may remember that I have a love for John Scalzi as he was featured in Broadside No. 5, tidings from the crew fer the dispatcher, and on the horizon fer the miniatures.  As I work me way through all things Scalzi, I realized I had never read his first written novel.

His author’s note talks about how this book became published and states:

“It began in 1997 as my “practice novel” – that is to say, the novel I wrote to see if I could write a novel . . . I had no intention of ever selling it or ever really doing anything with it.”

Luckily for me he did eventually publish it.  After one particularly rough day at sea, I decided that I needed a pick-me-up.  So I picked up this novel (hardy har har!)  It turned out to be the right choice fer me mood.  Fer a “practice” novel, it was pretty darn good.

The novel concerns humanity’s first contact with extraterrestrial lifeforms.  The aliens come to Earth looking to make friends.  The only problem is that they are funny looking and smell real bad.  The aliens are certainly not yer stereotypical little green men.  So what better person to contact than a Hollywood agent to help spin their introduction to our world?  Eventually the agency hands the task to junior agent Thomas Stein who has just had the best day in his career.  It is his last best day for quite some time . . .

This first novel certainly contains Scalzi’s brand of zany humor, dialogue, and characters.  While I like the main character’s ingenuity and caring, I also like the secondary characters.  As usual there are strong and powerful women.  Hooray!  The is certainly nothing earth-shattering about this one but it is super enjoyable and while silly still has moments that make ye think.

I don’t suggest this as the first Scalzi book to be picked up by newcomers but fer those already established Scalzi fans, I certain recommend going back to this beginning. 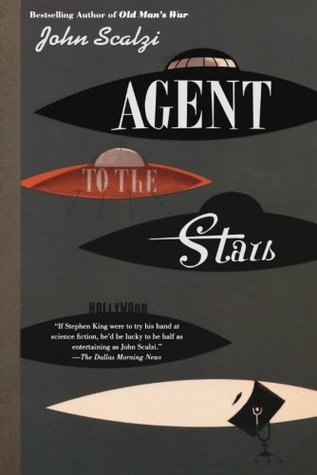 The blurb on the back has this to say about the book:

The space-faring Yherajk have come to Earth to meet us and to begin humanity’s first interstellar friendship. There’s just one problem: They’re hideously ugly and they smell like rotting fish.

So getting humanity’s trust is a challenge. The Yherajk need someone who can help them close the deal.

Enter Thomas Stein, who knows something about closing deals. He’s one of Hollywood’s hottest young agents. But although Stein may have just concluded the biggest deal of his career, it’s quite another thing to negotiate for an entire alien race. To earn his percentage this time, he’s going to need all the smarts, skills, and wits he can muster.

agent to the stars – Book