Ahoy there me mateys!  I was trying to figure out what to read when I saw this old school cover in the hold . . . 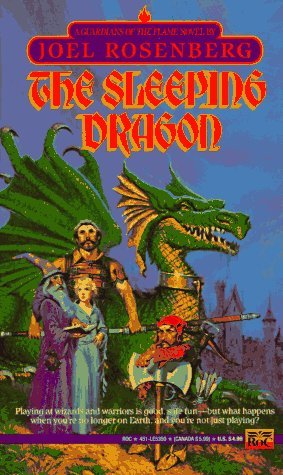 The First Mate and his siblings fondly remember this series from childhood.  And well I am an easy mark for all dragon-related things.  So I gave this a shot.  And I had very, very mixed thoughts.  Be forewarned, unlike me usual posts, there are spoilers at the end because of a need to rant.  Continue at yer own peril . . .

The book is set up in five parts:

“The Student Union” starts out with a group of college age kids who play table-top role playing games in a club.  I was never into that kinda gaming so it took me a bit to get into the novel.  But of course the players end up transported into the game world which is actually an alternate magical universe.  While the characters are rather stereotypical, I did find the students’ entrance and introduction to “Lundeyll” to be comical.  From accidentally destroying their supplies, to having split personalities while coming to terms with the mingling of their real and character memories, the beginning of the magical adventure made me happy.  Plus there were a few unexpected surprises.

The third part when they are journeying to the great city of “Pandathaway” is where the story started to go off track slightly.  This is where the love interest plotlines start to really kick in.  While the good news is that women in this 1983 novel can and do choose to sleep with multiple sexual partners if they want to, the men sulk like whiny babies and get all macho and protective and annoying.  It was a glimpse of things to come.  However I did like the wonderful library in the city and Doria haggling in the market and we get to meet our first dragon.  Arrrr!  I loved the silly dragon and its use in the city.  Made me laugh that the dragon in the book is described as brown with red glowing eyes.  Doesn’t match the cover at all.

After an extremely unexciting tournament (how can sword fighting be boring!) the group heads towards “Bremon” and the book enjoyment soured.  Why ye ask?  Because 1) it is just wandering with no real seeming purpose and more importantly 2) rape becomes a plot point.  The strong men sit in a wagon and listen to the women being raped for hours.  While it is certainly not graphic in the telling, it is completely irrelevant to the story and exists only to make the men feel revengeful, protective (after initially failing), remorseful, and so worse yet there can be a burden the men have to handle for the next segment.  Sigh.

So okay now that the strong women have been reduced to quivering husks now what?  The men get revenge!  Which happens off the page and ends up with a head in a bag.  Huh?  Then more boring traveling.  Then onto the a place “guarded by the most terrifying and deadly enemy of all!” Which is the promised dragon of the title.  Who DOES NOTHING.  Seriously it really does sleep while almost all the characters sneak past it.  This supposed first dragon, THE dragon, doesn’t even twitch when a horde of people go past him.  Its whole purpose it to GUARD the gate.  Some terror.  Some deadliness.  It wakes up just in time to spit some flame.  A super boring dragon!  Urgh!

“And Beyond” that, the book got even worse.  I won’t even get into it.  I finished it because it was short and was remembered with fondness and I just didn’t get it.  I guess I am too old and curmudgeony to suspend any real disbelief at the plot and only find meself disbelieving that this series is beloved by so many folk.

I did have the first mate tell me the continuation of the plot in the later novels.  I am mystified that there are any people who are fond of this and all I can say is that me head hurts and I will be avoiding them indefinitely.

CAPTIVES OF SORCERY…
It began as just another evening of fantasy gaming, with James, Karl, Andrea, and the rest ready to assume their various roles as wizard, cleric, warrior, or thief. But sorcerous gamemaster Professor Deighton had something else planned for this unsuspecting group of college students. And the “game” soon became a matter of life and death as the seven adventurers found themselves transported to an alternate world and into the bodies of the actual characters they had been pretending to be.

Cast into a land where magic worked all too well, dragons were a fire-breathing menace, and only those quick enough with a sword or their wits survived, the young gamers faced a terrible task. For the only way they would ever see Earth again was if they could find the legendary Gate Between Worlds – a place guarded by the most terrifying and deadly enemy of all….
THE SLEEPING DRAGON

7 thoughts on “Here Be Dragons – the sleeping dragon (Joel Rosenberg)”