Ahoy me mateys!  Grab your grog!  Here is the conclusion, book 3, of the fifth installment of the 3 Bells trilogy showcase.  The bonus of this installment is that though the first mate and I have very different reading tastes, occasionally we do overlap in our reading choices.  When I  found out he had read this series, I commandeered his reviews!  So you get one from me and a bonus additional review from me crew.  Please note that I write like I talk and the first mate writes like he thinks.  Hope ye enjoy!

This novel is the third in Kingfountain series and follows day one’s review of the queen’s poisoner and day two’s the thief’s daughter, .  A third stunning cover: 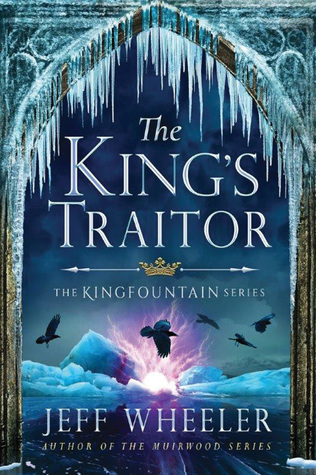 Seriously, the cover designs are just wonderful.  Unfortunately for me, this book was the weakest of the lot.  To be fair, the reading was still highly enjoyable and fast paced but did not float me boat as much as the other two did.

Basically, this novel had what to me were gaping plot holes.  Our bad king does not get what he deserves.  For all of the strong women in the series, one of the female characters in this book has an ending that is a travesty to all women ever in her situation.  The ending had a rather bad deus ex machina feeling where the individual character choices up to that point were almost inconsequential.  Mostly the feeling was just “huh?”

Now this could be due to the fact that I found out this trilogy in fact continues through the next generation of children.  So perhaps it is just the future set up for the remainder of the series.  But as this was, for me Owen’s trilogy, the ending was lackluster and a little annoying.

Basically finished this series with the ending of Owen’s story and will not continue any further.  But I do not regret reading these novels and they were quick and fast-paced one day reads.  Despite the plot failings, I do actually like a lot of the author’s writing style and would be interested to read the first book of his Muirwood series.  I will have to see if any of me fellow bloggers have opinions of that one.  So I consider this 3 Bells installment a success!

It was with a certain amount of trepidation that I started reading “The King’s Traitor” in that Wheeler had made it perfectly clear where he intended to take the story and also that he lacked the plotting abilities to take the story there in a realistic manner.  The question, therefore, would there be enough entertaining non-central elements to keep my interest as we made the all-but-certain-to-be-bumpy path to the conclusion?  Alas, no.

For the third time we have Owen run into an age-appropriate woman who falls madly in love with him, regardless of his objections.  For the third time, Owen’s opponents fall into his plans as though reality itself were warping to meet his needs.  Our Richard III analogue devolves from character to caricature; at one point, the method by which he chooses to dispatch someone has more in common with a plan by Dr. Evil of the Austin Powers films than with any actual attempt at killing someone.  Baddies from the past pop up, but they are dealt with so quickly and so far removed from the central conflict as to offer up practically no menace.

My central complaint of the first book was that Wheeler had a specific plot that he wanted to take the story in and he was going to tell that particular story whether it logically fit or not.  Unfortunately the second and third novels showed that he did not see such a choice to be problematic.  Indeed, the resolution of the conflicts in the third novel occurs almost entirely without logic.  The fate of our Richard III analogue is utterly baffling.  And the final scene lead this poor unfortunate soul to groan, “he’s gonna ruin that legend too?”

“The King’s Traitor” is the only novel of this series that I can say that I actually disliked.  I had quibbles with plot elements of “The Queen’s Poisoner,” but loved many of the characters and overall very much enjoyed reading it.  “The Thief’s Daughter” was a weaker book  but still had much to recommend about it.  This one?  Well, I’m not sorry I read it, but Wheeler and I shall part ways here.

Now normally I would post a summary of the novel here.  But as this is the third book in the series where the summaries online basically tell the plot, I am skipping the summary so you can find out what happens for yerself . . .